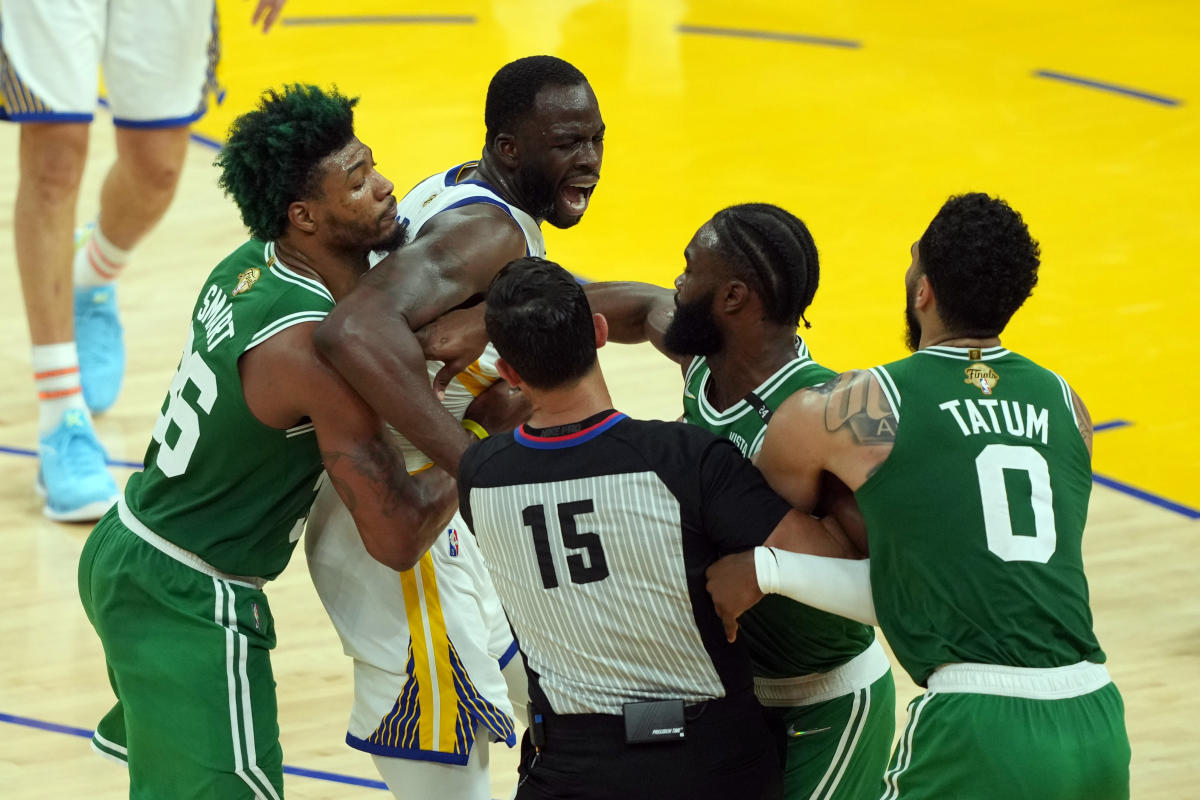 After a Game 1 misfire led to questions about whether Draymond Green could actually help the Warriors in the NBA Finals, the Golden State forward got back to doing what he did best in the game. game 2.

It means bully ball – getting into the body and mind of his Boston Celtics opponents. Green pushed, shoved and chirped the Celtics players on Sunday, and his physicality played a big part in Golden State’s dominant win to even the series. It also led to questions about whether he had gone too far – and whether he had received preferential treatment from officials at a location that could easily have led to his deportation.

Green made himself vulnerable to ejection when he fired a technical foul at 4:47 in the first quarter. Leaving no doubt about his intentions for Game 2, Green knocked Celtics bulldozer forward Grant Williams to the ground during a Warriors offensive set. To the dismay of neutral observers with a functional view, Williams somehow whistled on the play for a personal foul.

During the stoppage, Green and Williams continued. The whistle sounded again, this time for a technical foul on Green.

The technique did not distract Green from his course of action. He continued to harass Celtics players, with Jaylen Brown and Marcus Smart among his targets. Late in the second quarter, Green’s game plan almost got him thrown out.

Should that have resulted in Draymond’s ejection?

With 55 seconds remaining before halftime, Green reached out to challenge a 3-point shot from Brown. After Brown released the ball, Green fell backwards on top of him, sending both players falling onto the pitch. Green left his legs stretched over Brown’s body, prompting Brown to push him away. Green pushed back.

Brown then reached to his feet and stood over Green, which, of course, Green didn’t take kindly. He grabbed Brown’s shorts – prompting Brown to cry that Green “I tried to pull my pants down” – and got up before the players and officials separated the two.

This is a standard technical double foul. A no-brainer in any normal game situation for officials to restore order in a game that is spiraling out of control. This being Game 2 of the NBA Finals with Green having already accumulated a technical foul is not considered a normal game situation. Officials first rated Green with a personal foul, then hit the replay monitor to review the altercation.

“You must take into account, a player has a technical foul”

During the review, ABC cameras cut off official analyst and former NBA referee Steve Javie, who argued that despite the obvious double technical situation, officials should turn a blind eye because Green had already committed a technical fault.

“You have to take into account that a player has committed a technical foul,” Javie said. “Is that enough to call a double T and eject a player? Personally, I wouldn’t say anything, and I’d just let it spread like that.

“I think that’s part of good officiating. You have to know who has the technical fouls. In this situation, one of the players does it. Is that enough to warrant an expulsion?”

As Javie concluded his analysis, officials came to the same conclusion. No technique was assessed and Green played the remainder of the game as Golden State converted a 52-50 halftime advantage into a 107-88 blowout.

This raised obvious and glaring questions about how Green was officiated. More specifically, should he have been ejected?

The precedent says Green should have been cast

Kristaps Porzingis would like to know where those standards stood in the 2020 playoffs. The then-Dallas Mavericks forward found himself ejected from a playoff game under similar circumstances. In a Game 1 loss to the Clippers in a series Los Angeles won, Porzingis was ejected early in the third quarter for picking up his second technical foul in a fight that was arguably less eventful than that of Sunday between Green and Brown.

Dallas led 71-66 at the time of his ejection before losing the game 118-110. Porzingis and his Mavericks teammates were understandably upset. Especially considering that this “air punchresulted in Porzingis’ first technique.

Officials applied the strict letter of the law to Porzingis that day, with referee Kane Fitzgerald explaining after the game that they did not consider Porzingis already had a technique when evaluating his second.

“No, we applied the standards during the proofreading”, Fitzgerald said when asked if the officials considered the situation when evaluating his second technique.

This was clearly not the norm applied to Green Sunday. Green acknowledged this and told “SportsCenter” after the game that he “deserved differential treatment.”

“Not at all,” Green said when asked if he was worried about picking up a second technique. … “I deserved different treatment. I like it. I accept that.”

Green later explained on his podcast that “it makes sense” for officials to look away from an otherwise standard technical foul.

“The reality is that it makes sense,” Green said. “People want it to be controversial. It makes sense. Nobody pays to watch this stuff to see guys get thrown out of the game and you don’t see the game you wanted to watch. I get it and I I agree.

What should the NBA do?

On the one hand, Green is right. Nobody likes when officials leave a mark on the game. If he had been ejected, the game would have been impacted and the uproar would have been louder.

But the NBA owes it to its players to set a standard here and run with it. Ejections and playoff results should not be at the whim of any given officiating or replay team. If a second technical foul warrants a higher standard, this should be formalized and enforced at all levels.

In the meantime, if the Greens can truly play without fear of a technical second, consider the season opener of the Finals over the Celtics. There’s no reason for him to stop doing what he does best. And Boston will have to find a counter.